Charles Francis Clissold was born in Christchurch, Newport to William Peter and Sarah Ann, but he was Baptised in Twerton in Somerset in 1887, his parent’s parish.

In 1910 he married Lilian Sweeney. By April 1911 he was working at the Lysaght Orb works as a reshearer, the couple were living at 51, Bishton Street, Newport, and had a son called William (Billie) who was born on 6th February 1913.

Charles joined up early in the war and served with 10th Battalion South Wales Borderers, by 3rd December 1915 he had been sent to France. Charles was a Company Sergeant Major

The battalion War Diary recorded that Charles was killed at 12noon on 25/08/1917 after heavy shelling. He is buried at Poelcapelle British Cemetery. Lillian put a memorial in the paper that said, “Sadly missed by wife and little son Billie - Though death divides, found memories cling”. Lillian received £19 back pay and war gratuity.

In 1939 Lilian and William were living at 94, Christchurch Road, Newport, William was working as an order clerk, he was also in the Auxiliary Fire Service. Lilian never re-married, she died in March 1969 aged 83 some 52 years after Charles was killed in action. 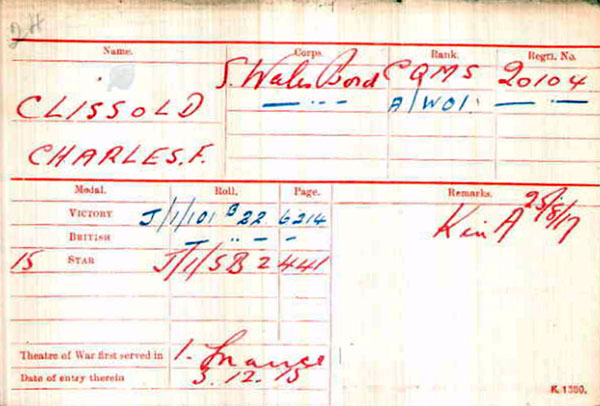