Samuel was born in October 1894 to Rossanah and Richard Clarke in Wolverhampton, Staffordshire. Tragedy struck the family in 1898 when Richard died, leaving Rossanah with three small children. In 1899 she married George Wilkinson and the family made their way to Newport.

In 1911 the family were living at 51 Feering Street, Newport and Samuel was listed as working at the Orb as a scrap cutter. The family lived next door to the Watkins family, their son John was killed in action on 17th September 1918

Samuel joined the Welsh Regiment. We know that the 8th Battalion landed at Anzac Cove between 3rd – 5th of August and took part in the Battle of Sari Bair, and it is here that we believe Samuel was killed in action. The battle started on 6th August 1915 at 5.30am, the battle was to continue until 21st August, it was a final attempt by the British to seize control of the Gallipoli Peninsular. By the end of the battle 13,000 British soldiers were listed as either dead, wounded, captured or missing.

Samuel left his mother Rossannah his back pay and his war gratuity, she received £3 10-/-. 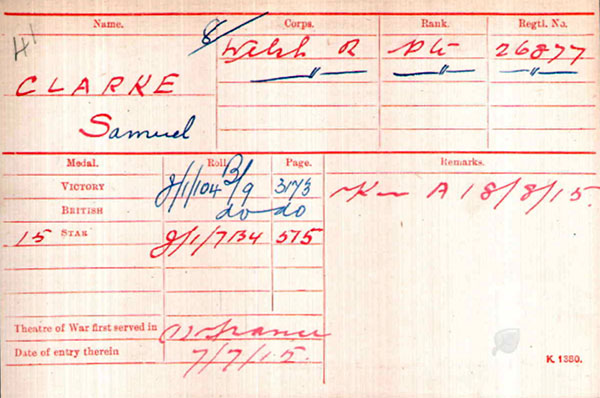